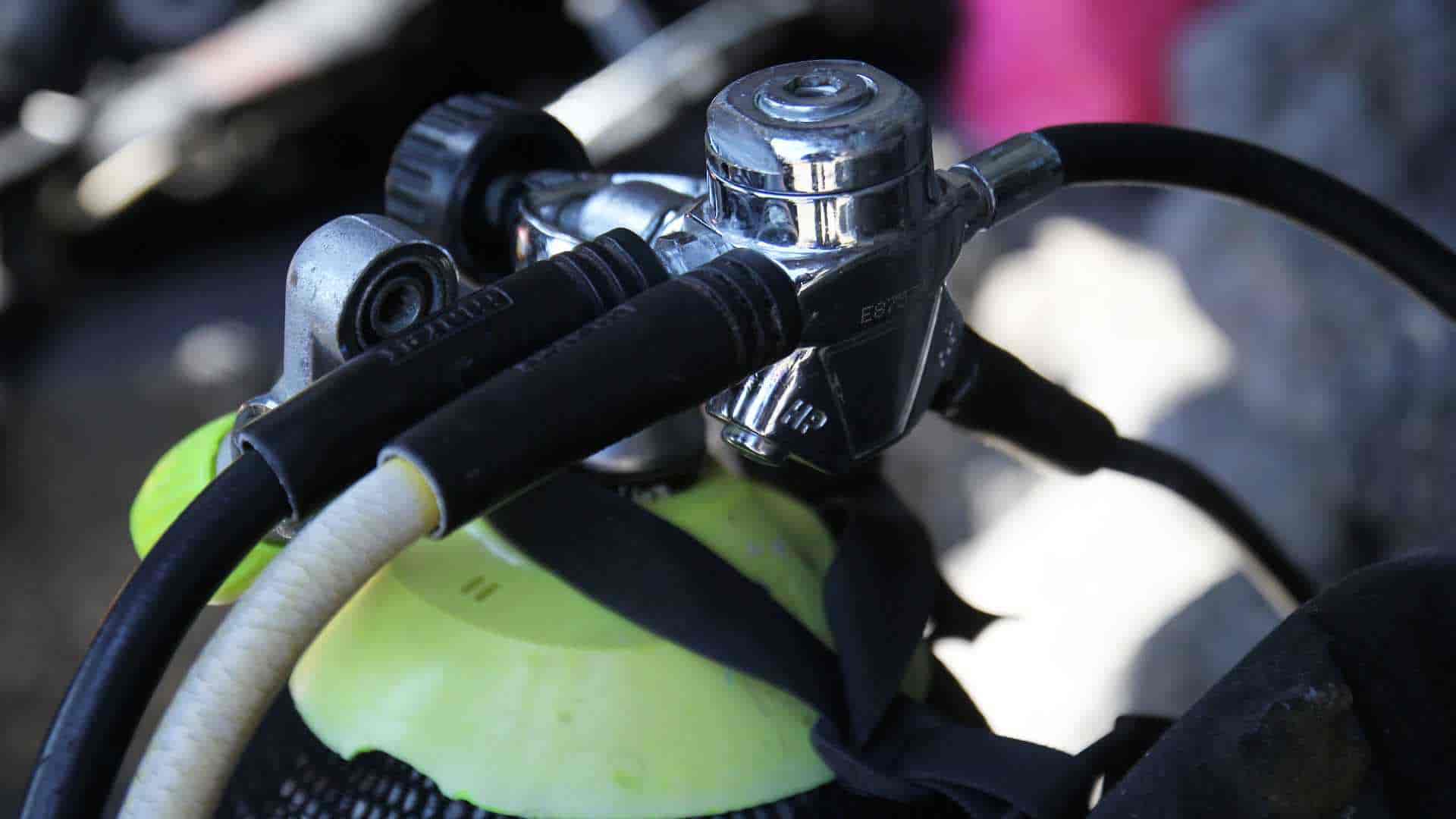 In scuba diving, you will encounter two types of valves on scuba tanks, regulators, and compressors: DIN and Yoke (also called INT).

Depending on where you learned to dive, you have probably used one or the other and did not think twice about it.

Chances are, you are now traveling to a different diving destination where they use the other one and want to know, what to do about it.

Or you might be looking to purchase your first scuba regulator and now want to know which valve type is better.

In this short article, we will look at the difference between DIN and yoke valves in scuba diving, which one to pick for your own scuba gear, and what to do if you don’t have the right one at hand.

Difference between DIN and Yoke valves

DIN (Deutsche Industrie Norm) setups consist of a threaded first-stage scuba regulator that is screwed into the tank valve, while the O-Ring is placed on the regulator. Yoke (also called INT) features a clamp-type mount on the regulator that is placed on the tank valve sealed by the main O-ring. DIN is considered safer and has higher pressure ratings than Yoke, while the latter is often cheaper.

DIN and Yoke/INT valves are completely different, yet built to do the same thing: Connect your regulator to your tank to lower the pressure in order to breathe underwater.

Therefore, whatever you choose, they will both do their job.

DIN (Deutsche Industrie Norm = “German Industrial Norm”) is a standard first developed in Germany that is used throughout most of Europe, while Yoke is found everywhere in North and South America, as well as most parts of Asia and Oceania.

Let’s compare DIN valves and regulators with Yoke ones and see when to use each one.

Of course, Yoke valves may also be used for technical diving (see below), however, DIN ones are superior.

Whether to pick DIN or Yoke for your valves is a personal preference and depends on your location, the local diving community, and the kind of diving you are planning to do. DIN valves are considered safer since they cannot be torn off while diving, and have higher impact resilience, and pressure resistance. However, Yoke valves are usually cheaper on more common in many parts of the world.

It’s usually best to pick the type of valve that’s most common at the diving destinations you plan to dive at the most.

If you are an avid local diver, it helps to choose a valve that can be attached to the scuba tanks used in your area.

For example, if you dive a lot in the US with your local dive community, it makes sense to get a Yoke regulator. This way, it is easy to attach it to the scuba tanks used around you and get them filled at the local dive shop.

On the other hand, if you live in France, but do most of your diving in Thailand or the Maldives, for example, it could make sense to get the Yoke instead of the DIN one, as that is what’s used there.

Last but not least, there are also adapters to convert DIN to Yoke and vice versa that can be bought.

They work like a charm and are very safe.

I personally think DIN valves are better in all regards, and I am hoping more countries start establishing them as the standard.

However, there is nothing wrong with either option.

Technical divers prefer DIN valves for several reasons: They increase diving safety by providing greater impact resilience, are easier to screw on and off, and can withstand higher pressures than Yoke valves. Additionally, DIN valves have fewer moving parts like a clamp or a screw, and therefore, there are fewer potential failure points.

This concludes this little overview of the comparison and difference between DIN and Yoke valves in scuba diving.

Which one you buy is a personal preference and depends on your local diving community. In general, DIN valves are safer and more versatile, while Yoke ones are more common around the valve and cheaper.

Which one do you prefer?