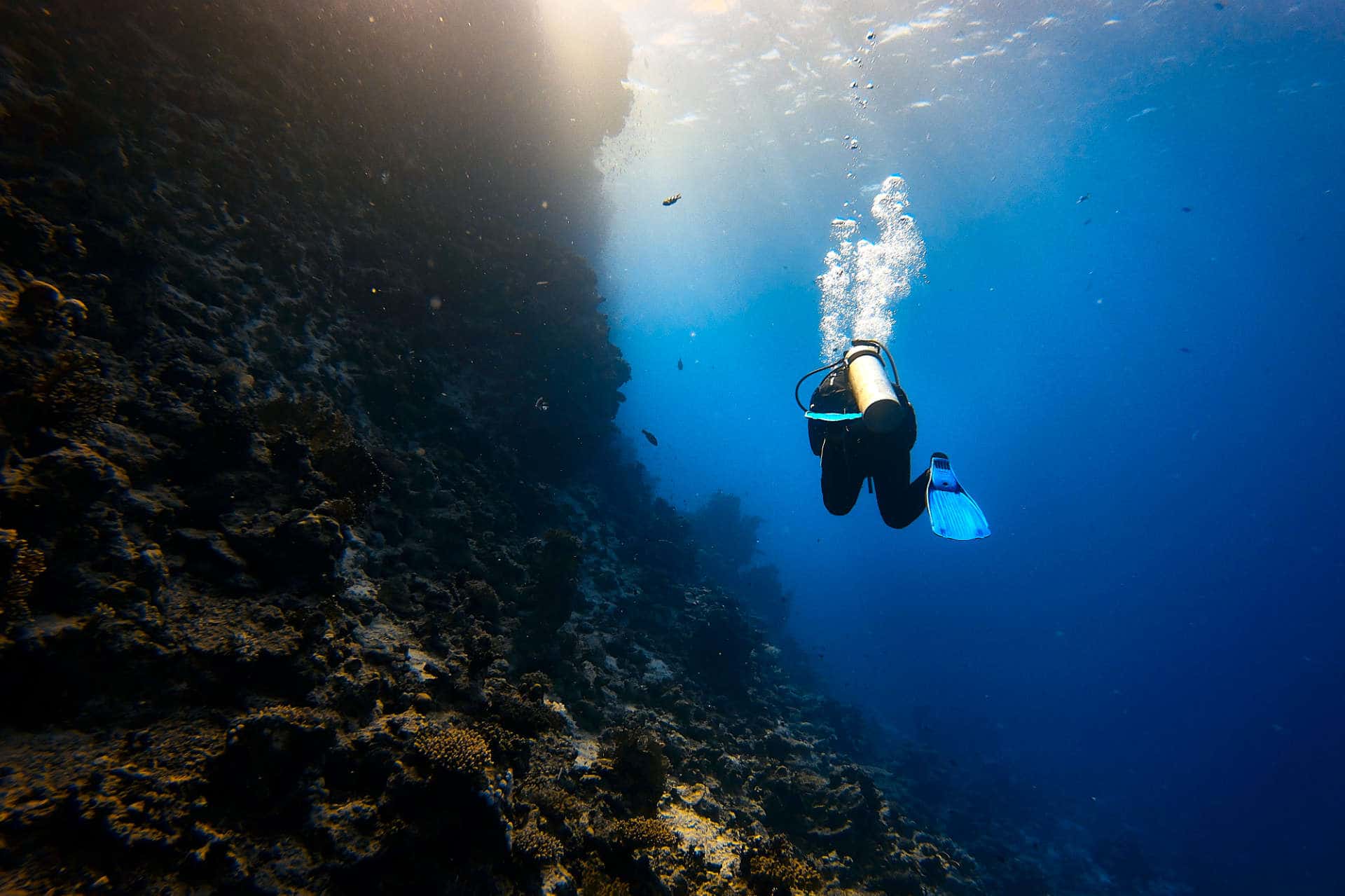 Decompression illness (DCI) is a serious topic in scuba diving and it’s important that all divers know about it.

Also commonly referred to as “the bends” it can cause health issues for divers after rapid ascents and end diving vacations in an unpleasant way.

In this article, we’ll look at what decompression illness is, how it happens, and what we can do as scuba divers to prevent it.

You might also be confused by some other terms being thrown around such as decompression sickness (DCS), and arterial gas embolism (AGE). Therefore, we will also look at what these are and how they differ.

If you just want a quick answer, jump to the end and a small summary I made for those short on time!

What is Decompression Illness?

Decompression illness (DCI), also called generalized barotrauma or the bends includes two medical conditions caused by rapid decompression of the body: Decompression sickness (DCS) and arterial gas embolism (AGE). It is often an issue in scuba or commercial deep sea diving, but may also occur in high-altitude environments, or flight operations. If left untreated, DCI can have serious and even fatal consequences.

In short: Decompression illness is the group of medical complications we experience after a sudden large drop in pressure around us that causes injuries to our lungs, brain, and body tissues.

Although the terms decompression illness and decompression sickness sound similar, they are different and should not be used synonymously.

Decompression illness (DCI) is the overall term for injuries related to the reduction of the ambient pressure around us: Decompression sickness and arterial gas embolism.

Arterial gas embolism (AGE) is caused by trapped air expanding in our lungs and causing ruptures and barotrauma.

The general term decompression illness is used predominantly in scuba diving, as both DCS and AGE have very similar symptoms and are treated the same usually.

Other risk factors which may increase DCI risk include dehydration, smoking, heavy exercise after extended dives, obesity, pulmonary disease and even genetic preposition.

We use conservative ascent rates, no-flight times, as well as dive tables and dive computers to lower the risk of getting DCI after a dive.

Decompression sickness (DCS) is also called the bends or caisson disease and results from inadequate decompression after being exposed to increased ambient pressure. During a dive, nitrogen is absorbed and released upon ascending. If the decompression happens to fast, bubbles form in our tissues causing damage to our brain, lungs, and other body parts.

In short: Decompression sickness is caused by bubbles of dissolved nitrogen or insert gases that enter our body tissues and cause injuries.

During a dive, our body absorbs nitrogen and other inert gases from the breathing gas in our tank at the surrounding (ambient) pressure.

The deeper we dive, the higher the partial pressure of the nitrogen and the more gas is taken up by our tissues. If you need a reminder on how gases behave underwater, check out my guide on scuba diving gas laws!

As long as the pressure around us stays the same, there are no issues and the gas is simply dissolved in our tissues. However, once we start ascending, the decompression process begins.

If done too fast, the dissolved gases (nitrogen) come out of the solution and may form bubbles in our tissues and bloodstream.

They cause inflammation-like symptoms, as well as blood clogs and even more complex reactions up to the loss of consciousness and paralysis.

Decompression sickness is often referred to as “the bends” due to the pain it causes in joints and muscles, leading to a bent position of the affected person. They are most often reported in the elbows, knees, and hips.

The name caisson disease comes from the first documented occurrences of decompression disease in workers building the Eads and Brooklyn Bridges in St.Lous, and New York City.

Workers were let down into so-called “caissons”, large compressed air boxes used to build riverine piers and abutments anchoring the bridges. When pulled up too fast, they would complain about joint aches and other issues until being let down again after which their troubles would subside frequently.

DCS has two types, with one of them being mild and usually easy to treat, and the other causing serious injuries and long-term complications.

As you can see, the symptoms vary depending on the type of DCS and may be mild or complex.

Especially circulatory shock reactions are similar to that of a stroke and may start while the diver is still in the water.

How to Treat Decompression Sickness

When a diver experience symptoms of decompression sickness, whether mild or severe, they must immediately leave the water. Administer 100% pure oxygen, ensure they are hydrated and initialize a rescue chain. Call your dive insurance provider and they will point you to the nearest hyperbaric oxygen chamber to start the appropriate treatment.

Like you learned in your Open Water Diver course, you should administer 100% pure oxygen and call the diver’s dive insurance provider.

They will point you to the nearest hyperbaric oxygen chamber (HBO) and help you with getting the diver treated right away.

Although there are many mild cases, in which such treatment might not be necessary, it is always important to have a physician evaluate the symptoms and suggest treatment.

NEVER attempt a so-called wet decompression, in which the diver returns to the water in order to make up for the missed decompression. This used to be taught many years back, however, there is serious risk for drowning and other complications in this!

How to Prevent Decompression Sickness

The best way to prevent decompression sickness is to follow the rules of safe diving and stick to the general recommendations for safe ascent rates by your scuba training agency.

Here is a little refresher on the ascent rates:

Remember to take a safety stop at 5m/15ft for 3 minutes after every dive!

Follow the guidance of your dive computer and stay within the recreational non-decompression limits (NDL).

When divers ascend without exhaling, trapped air in the lungs expands may cause alveolar ruptures in the lung tissues. This is called “Pulmonary Overinflation Syndrome,” which may result in arterial gas embolism (AGE). Gas bubbles are released into the arterial circulation that can interrupt circulation and have consequences similar to a stroke.

In short: Arterial gas embolism is caused by overexpansion and rupture of the lungs that leads to interrupted circulation and stroke-like symptoms.

Upon overexpansion or even rupture of the lung, “used” or “contaminated” blood is distributed through the body, especially the brain.

It is also called overexpansion barotrauma and should be avoided at all times.

AGE is considered more dangerous than DCS and often occurs after emergency ascents or after a diver held their breath while coming up to the surface.

The main cause is usually panic or poor air management leading to “out of air” situations underwater.

Pulmonary diseases such as obstructive lung disease may increase the risk of AGE, as well.

Last but not least, AGE often goes hand in hand with lyringospasm which is a blockage of the airways after water has entered.

On the other hand, some divers experience AGE without any unnatural causes and even while sticking to the dive plan.

In many cases, however, divers already surface unconscious and with severe impairments like paralysis or worse. AGE often goes hand in hand with a DCS type 2 and looks similar to a stroke.

Symptoms are loss of consciousness, paralysis, clear confusion, and inability to communicate.

How to Treat Arterial Gas Embolism

Arterial gas embolism requires immediate medical treatment and attention. Delaying treatment can have long-term and potentially fatal consequences like residual brain damage or disabilities. For first aid measures, AGE can be treated the same as decompression sickness by administering 100% pure oxygen, ensuring the person is hydrated and initializing the rescue chain to a hyperbaric oxygen chamber.

How to prevent arterial gas embolism

The best way to prevent arterial gas embolism is to remember the first rule of scuba diving:

Breathing consistently lowers the chance of blocking your airways and experiencing AGE.

Returning to diving after DCI

Whether it is possible to return to diving after experiencing DCI depends on the degree of symptoms, long-term effects, and recovery progress.

Especially in the case of AGE, it is more common that symptoms occur again on later dives.

Consult a medical professional and get a diving medical check-up before returning to diving!

Here are some general recommendations on when you can return to diving after experiencing DCI:

If you experience DCI (even with just mild symptoms) regularly, consult a physician to rule out any medical conditions like PFO (perforated forame ovale), left-right shunt, or pulmonary diseases before returning to diving.

In some cases after severe cases of DCI you may not be allowed to return to diving like before. In this case, your physician may be able to offer advice on ways to continue to dive.

The biggest issue with freedivers experiencing DCI is that for a support diver, the symptoms look like a typical pool blackout.

He went unconscious on his ascent at around 20m/65ft depth and was pulled up by his rescue divers who thought he had a blackout.

Nitsch ended up with severe neural damage, impacting his ability to walk, think, and even speak.

You can watch this video on Herbert’s incredible recovery here:

Wheeew…that was a lot of information on decompression illness. Let’s recap quickly so you have the most important info in one spot:

Decompression illness (DCI) is the overall term for injuries related to the reduction of the ambient pressure around us: Decompression sickness and arterial gas embolism.

First aid treatment is the same for both and includes administering 100% pure oxygen, ensuring hydration, and initializing the rescue chain to a hyperbaric oxygen chamber.

It is often caused by rapid ascents and incomplete decompression underwater. Stick to the general safe ascent rates, and observe your dive computer to prevent DCS.

Arterial gas embolism (AGE) is caused by trapped air expanding in our lungs and causing ruptures and barotrauma.

It often occurs after panic ascents and laryngospasm underwater and can cause serious pulmonary and neural injuries.

This concludes this guide to understanding decompression illness in scuba diving and other activities.

Don’t be scared, though. Only a very small fraction of scuba divers every experience DCI and in most cases, such cases are very light.

As long as you stick to the rules of safe scuba diving, correct ascent rates, and the decompresion recommendations of your dive computer, you will likely always be safe!