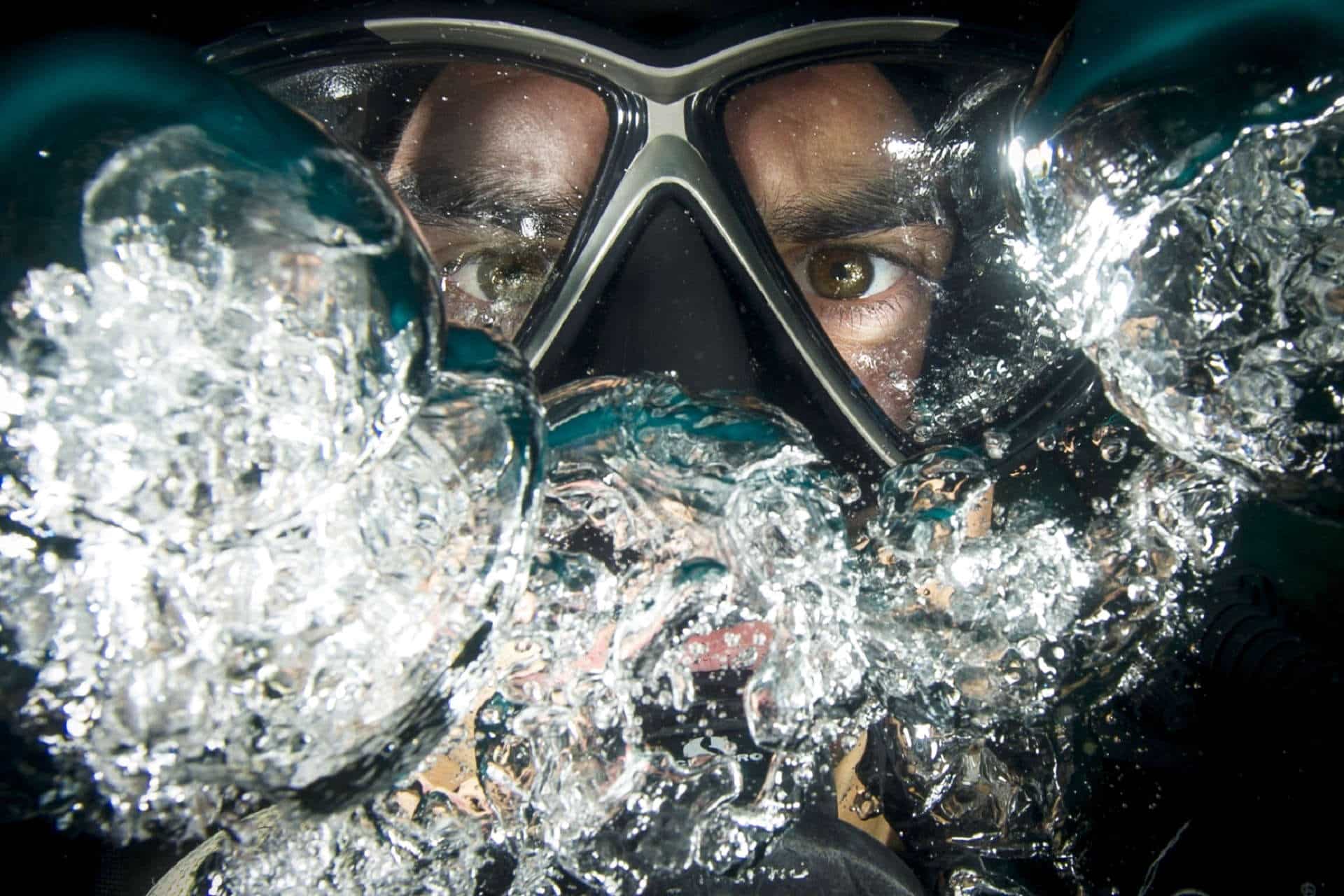 Faster, higher, larger is the motto for many people and scuba divers are no different in this regard.

Every year, brave (and sometimes foolish) people try to come up with something new and often incredible to be remembered by.

Below you will find an updated list of the latest verified scuba diving records.

Let’s get into some general scuba diving records that everyone likes to know.

The deepest dive by a man was 332.35m by Egyptian Ahmed Gabr in the Red Sea off Dahab, Egypt on September 18, 2014. (Guinness World Records)

The deepest dive by a woman was 236.04m by South African Karen van den Oever in the Boesmansgat Cave in the North Cape in South Africa, on March 26, 2021. (Guinness World Records)

The largest diving course had 2,465 participants and was held on August 16, 2009, on Malalayang Beach in Manado, Indonesia during an event organized by the Indonesian Navy. (Guinness World Records)

The most historic shipwreck locations visited on scuba is 243 and was achieved by Alejandro Mirabal (Cuba) across several continents from December 1986 to August 2017. (Guinness World Records)

To read more about the fascinating Sylvia Earle check out her and other famous women in diving.

He went on the dive on his 100th birthday which is probably one of the best ways to celebrate it besides going to space.

It looks absolutely fascinating, although it can be questioned whether the pool actually serves a purpose other than marketing.

The longest scuba dive in a controlled environment is 212 hr 30 min by Michael Stevens of Birmingham in a Royal Navy tank at the National Exhibition Centre, Birmingham, England from February 14-23, 1986. (Guinness World Records)

The longest underwater cleanup lasted 168 hours and 39 minutes and was achieved by Astro (Malaysia) in the Tunku Abdul Rahman Marine Park in Kota Kinabalu, Sabah, Malaysia, on 13 April 2013.

The most participants in an underwater clean-up in 24 hours is 633 and was achieved by Dixie Divers (USA) in Deerfield Beach, Florida, USA, on 15 June 2019. (Guinness World Records)
They recovered 544 kg (1,200 lb) of trash consisting mainly of fishing lines and lead weights used in fishing.

The longest scuba submergence on one cylinder is 8 hr 20 min 38 seconds by Jacobus Jacobs (South Africa) at All About Scuba, Rustenburg, South Africa, on 27 January 2007. (Guinness World Records)

He used only one 12-liter scuba cylinder the entire time!

Besides extreme deep diving, cave diving is arguably the area in modern diving in which records are most sought after.

The previous one by Nuno Gomes can be found here:

The longest recorded cave dive was 11.25 kilometers (7 miles) in 2007 by Jarrod Jablonski and Casey McKinlay as part of the Woodville Karst Plain Project in Florida, USA. (South Florida Explorers)

People are surprisingly eager to achieve diving records on their wedding days. These are a few of the best ones.

Speaking of a deep connection, huh. 😉

The largest underwater wedding was attended by 303 divers at the ceremony between Ewa Staronska and Pawel Burkowski (Poland) during an event organized by Orka Group Ltd (Poland) at the Koparki Diving Base, Jaworzno, Poland, on 27 August 2011. (Guinness World Records)

They not only used scuba and signals but sign language to communicate underwater.

Check this out here:

The fastest half marathon on scuba gear by a woman is 2 hr and 58 sec by Chloe Williams (UK) in Cardiff, UK, on 1 October 2017. (Guinness World Records)

The fastest half marathon in a firefighter’s uniform on scuba gear by a man is 3 hr 21 min 41 seconds by Simon Trye (New Zealand) in Kerikeri, New Zealand, on 21 November 2020. (Guinness World Records)

Not all scuba diving records are super serious.

Some are just not-so-serious reminders of why we dive in the first place: Having fun.

These are the best funny diving records.

The most people playing dominoes underwater is 60 by the Del Mar Dive Club (UK) in Wigston, Leicestershire, UK, on 27 August 2013. (Guinness World Records)

The most people extreme ironing underwater is 173 and was achieved by the Waterman Diving Club (Netherlands) in Oss, Netherlands, on 28 March 2011. (Guinness World Records)

They ironed for 10 minutes underwater. It looked something like this:

The longest underwater live radio broadcast (unsupported) is 5 hours, 25 minutes 25 seconds and was achieved by Stu Tolan (New Zealand) from 104.8 Channel 4 at Atlantis, The Palm, in Dubai, UAE, on 13 May 2017. (Guinness World Records)

The longest underwater juggling of three objects is 1 hour and 40 minutes by Markus Just (Germany) at the Freizeit Messe Nuremberg in Nuremberg, Germany, on 03 March 2013. (Guinness World Records)

Noel McCully (USA) achieved the most hours logged in a diving helmet at the staggering number of 25,000 between 1976 and 2013. (Guinness World Records)

The youngest person to dive to the Titanic is Sebastian Harris (b. 19 September 1991, USA) who at the age of 13 years and 319 days dove to the wreck aboard the Russian submersible Mir 2 on 4 August 2005. (Guinness World Records)

‘The Old Gentleman of Raahe‘, at the Museum of Raahe, Raahe, Finland, is the oldest known surviving diving suit in the world. (Interesting Engineering)

It was made of leather and definitely wasn’t a pretty sight. Oh yes, it still works. 😎

So, if you got a few spare minutes, I highly suggest you take a look at it here:

We love to think of ourselves as “diving like fish” when scuba diving.

Here are some interesting diving records by animals that are actually made to dive underwater.

The longest duration dive by a mammal was 222 minutes (or 3 hours 42 minutes) made by a Cuvier’s beaked whale (Ziphius cavirostris). (Journal of Experimental Biology)

How do we know? The depth was measured in a study by scientists logging over 3,000 dives over the course of 5 years.

The longest recorded dive by a marine vertebrate is 10 hr 14 min by an adult female loggerhead turtle (Caretta caretta), in the Mediterranean Sea, off the coast of Tunisia in February 2003. (Guinness World Records)

The deepest dive by a chelonian was 1,200 m (3,937 ft) by a leatherback turtle (Dermochelys coriacea) off the Virgin Islands in the West Indies in May 1987. (Guinness World Records)

This concludes this list of the best scuba diving records.

Were you surprised by some of them?

Check out these 10 surprising scuba diving facts if you want to read more cool things about your favorite underwater sport!

Or how about the top 10 myths about diving many people believe?

Last but not least, here are the current freediving records in 2022.

We're ready supported
Just so you know, some of our articles contain affiliate links. If you click them and make a purchase, we will earn a commission. It won't cost you anything extra but it helps us pay the bills.
Thank you for supporting Social Diving this way!