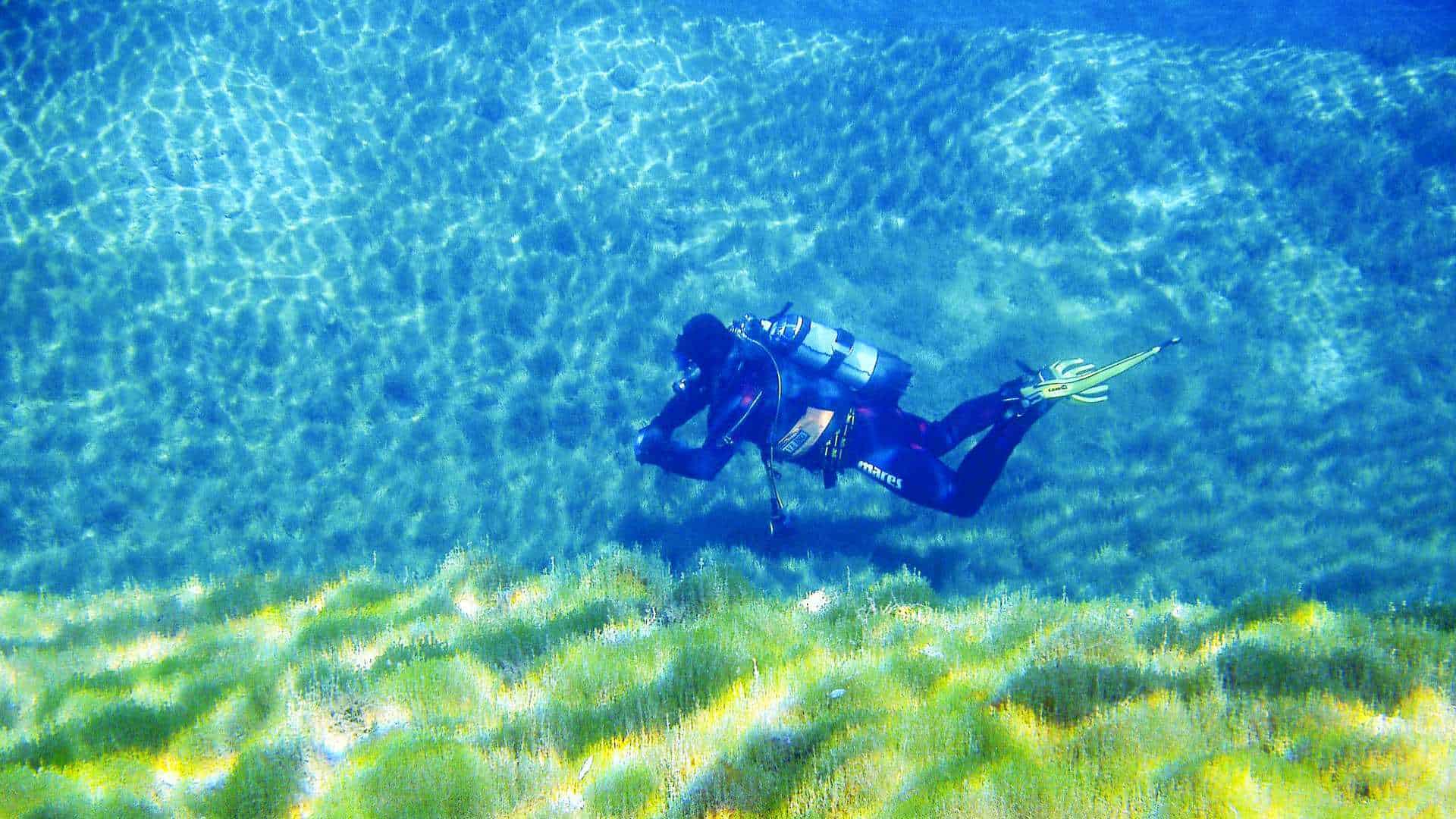 With over 70% of our planet covered in water, there are plenty of places to dive.

From shore diving at the beach to freshwater lakes in the mountains, quarries, rivers, and even caves, you will probably never run out of dive sites to explore.

Depending on your location, you might encounter fresh, salt, or brackish water.

In this article, we will look at the differences between freshwater and saltwater diving and how it affects buoyancy, scuba weight, and pressure.

The categorization of water type is based on its salinity, the amount of salt dissolved in it naturally. Freshwater has a salinity of less than 0.05%, brakish water lies between 0.05-3% and salt water is anything above. Seawater in the ocean has an average salinity of 35,000 ppm, or 35grams of salt per liter of water. The salinity of water also affects other properties like density, freezing point, and viscosity.

About 70% of the Earth is covered by the ocean, meaning most of the water on the planet is saltwater.

Let’s look at each of the water properties individually and see what changes.

The more saline a body of water, the higher its density. For scuba divers, this means you experience more upward buoyancy in saltwater, as by Archimedes’ principle buoyancy is based on the weight of the displaced water.

Higher density of saltwater leads to greater pressure acting upon us underwater.

While the differences are negligible at shallow depths, they become more pronounced at depth.

You can use this underwater pressure calculator to see for yourself!

Higher salinity leads to a lower freezing point of water.

This means that in highly saline water (salt content greater than 5%) like Antarctica it is possible to dive in water below the normal freezing point.

Therefore, sea water usually does not freeze while freshwater lakes indeed do.

Saltwater is more viscous than freshwater, meaning it flows slower and it reacts slower to deformation.

For scuba divers, this is usually not relevant, except maybe for extreme freedivers attempting world records.

They could potentially feel it is a LITTLE harder to swim in saltwater than freshwater.

Saltwater has a higher density than freshwater which means it is “heavier”. As such, we need to add more weights to our weight belt in order to descend for our scuba dive.

The difference can be pretty big, and as a rule of thumb, you can add about 30% more weight in salt water than in freshwater.

However, the number may be less or even more depending on the dive site.

Use the FREE scuba diving weight calculator to get accurate estimates of the number of weights you will need on your next dive.

Saltwater attacks scuba gear more than other types of water and requires more thorough gear maintenance after every dive.

For example, when I dive in Croatia in the Adriatic Sea, I like to make a stop in the Austrian Alps and jump into one of the mountain lakes there to clean my equipment.

Freshwater diving in lakes has a big advantage in that we usually don’t need to wash off our equipment after every dive. Sure you might want to clean it afterward, however, it isn’t nearly as important as in saltwater.

Visibility is not better or worse in any type of water, as it mostly depends on the environment.

However, we generally encounter lower visibility in freshwater.

This is caused by the often muddy bottom, more static particles due to the lack of currents, and the topography underwater.

However, many mountain lakes are the exact opposite of that and you may enjoy visibility of 50m/150ft+ there.

Currents are most often encountered during saltwater diving.

Places like the Maldives, or Mexico often have very strong currents that can make scuba diving difficult for beginners.

On the other hand, currents are rare to non-existent in most freshwater lakes.

It comes as no surprise that ocean diving, with reefs full of fish, critters, and other inhabitants, as well as countless pelagic species, has a lot to offer in terms of marine life sightings.

Divers know that diving in the ocean has the biggest chance of encountering some of their favorite marine animals and it’s clearly its biggest advantage.

On the other hand, freshwater diving is more limited in marine life, and what you find is often smaller and less diverse than in the ocean.

Most divers report that freshwater diving is more difficult than in the ocean.

From teaching hundreds of people how to dive, I can attest that most divers -even though they might have plenty of ocean diving experience- find it difficult to dive in a lake for the first time.

Due to the smaller density, freshwater tends to be less “forgiving” when making small buoyancy mistakes.

Deflating and inflating your BCD leads to an immediate response and there is no delay like you might feel in the ocean.

This much dive equipment is often difficult to handle for inexperienced divers and just the act of putting on a 7mm wetsuit can be exhausting. 😉

Last but not least, as we discussed above, the visibility in freshwater dive sites can often be worse than in the sea.

This does make many people nervous and might be a reason why freshwater diving is considered more difficult than saltwater diving.

However, saltwater diving has its own difficult aspects such as currents and interactions with marine life.

Should I get my scuba certification in freshwater or saltwater?

The best place to get scuba certified is wherever you feel most comfortable and excited to dive. There are advantages and disadvantages to both, however, its always best to just start instead of planning too much ahead. In general, learning to dive in freshwater can be more difficult than salt water but in the end, a good dive instructor and experience make the biggest difference.

Therefore, I suggest you look for a good dive school and get excited for your first scuba dive!

There is an age-old fight between freshwater and saltwater divers on what environment produces better divers.

In my opinion, all these discussions are nonsense and the same rule applies as always:

It is true that in the case of Social Diving, we tend to see that divers who did their course in freshwater have developed better buoyancy skills than others.

However, I cannot make generalizations here and this could also be due to the special altitude environment we have at our dive centers in Munich and Frankfurt in Germany.

This concludes our comparison between freshwater and saltwater diving.

As you see, there are quite a few differences and it is worth checking out all kinds of diving environments as a scuba diver.

If you need some suggestions, check out the best dive sites in the world 2023 for my recommendations!