Diving in Central America is exciting and mysterious at the same time.

It is the Mesoamerican biodiversity hotspot and you will be able to see countless species up close.

From the hammerhead sharks in Costa Rica to some of the cheapest diving around in Honduras, there is something for all scuba divers and travelers here. 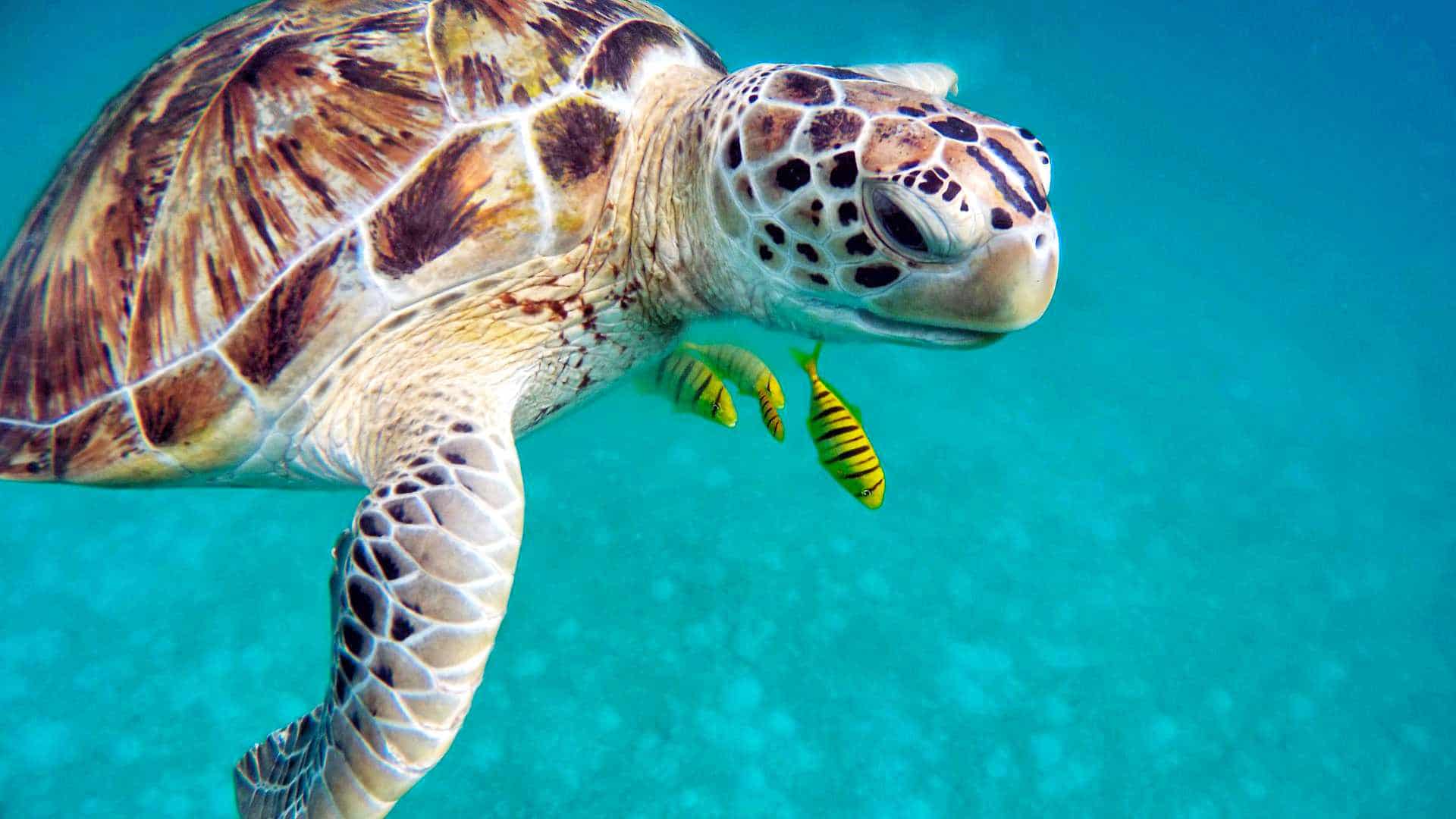 The best diving in Central America

Central America is the southernmost part of North America and experiences frequent volcanic outbreaks and earthquakes.

At the same time, the biodiversity both under and above the water surface is astounding and you can spend years trying to catch a glimpse of just a part of it.

This makes Central America one of the best diving destinations in the world with great opportunities for all levels.

Some also include the Southern part of Mexico, however, it technically belongs to North America.

The region (not a continent!) holds some of the best dive sites and adventures you could want and has access to two great diving environments.

In the East, the Caribbean Sea awaits with beautiful reefs, sandy beaches, and warm, protected waters.

The Pacific Ocean borders the region in the West and comes with large pelagics, and some of the best most sought-after shark species in the world.

The sea is calling

Fun fact: There is no location in Central America that is more than 200km (125 mi) away from the sea.

Let’s go through the region from North to South, explore the environment, and check out the best scuba diving in Central America.

Belize is the northernmost country in the region and a diving destination of superlatives.

Tucked in between Mexico and Guatemala, the country also comprises 400 islands off its coast and has 298km (185mi) of coastline. This is more than the entire length of the country from North to South.

It is home to the longest unbroken barrier reef in the Western Hemisphere which in turn is part of the even greater Mesoamerican Barrier Reef System.

The Belize Barrier Reef is one of the most diverse ecosystems in the world, featuring a staggering:

White sandy beaches dominate the shores with lagoons all over.

Inland Belize has a large flora and fauna to be proud of and even some smaller mountain ranges in the West.

The world-famous Belize Blue Hole is often considered one of the 10 must-see dive sites in the world, and the Discovery Channel even titled it one of the 10 most amazing places to visit on the planet.

Guatemala in the West is another biodiversity hotspot both on land and underwater.

This small mountainous country has some great altitude diving spots around lake Atitlán, the deepest lake in Central America. It is surrounded by 3 active volcanos, and the topography underwater is largely made up of the same rocks.

Between February and April, you have the best visibilities here as there is less rain.

Other land-based attractions in Guatemala include the Mayan ruins of Tikal, and the UNESCO World Heritage site of Antigua Guatemala.

Scuba diving in Honduras is pretty much synonymous with Roatan and Utila, two islands in the Mesoamerican Barrier Reef system. Both are inside a protected marine park.

What makes Honduras really stand out among the rest is that it is super affordable and a backpacker’s heaven. It is one of the cheapest places to scuba dive in the world, and accommodation is similar.

Apart from its shores on the Pacific Ocean, and the Caribbean Sea, Honduras consists mainly of mountains.

El Salvador is a small country on the Pacific side of Central America with yet another completely different diving environment.

The key word here is crater diving. The Coatepeque and Illopango lakes offer some truly amazing opportunities for scuba divers.

In both active volcanic calderas, you can feel the warm water from the volcano coming from below, or observe the sulfur deposits on the lake bottom.

Snorkeling and surfing are two other popular activities here since the country is very urbanized and doesn’t offer too many land-based attractions, besides a sprawling nightlife!

Nicaragua is a relatively scarcely-visited country and not many think of it when planning their next dive trip.

However, this makes it an even better destination, as most dive spots are well-preserved with few divers and other tourists. Eels, sharks, rays, groupers, and African pompano are frequent along the Caribbean Sea of Nicaragua.

Some of the dive sites you should check out are the Corn Islands (especially Little Corn) for lots of sharks. Alternatively, visit the volcanic crater lakes Apoyo and Xiloá for incredibly clear waters and diverse marine life.

The country has a lot more volcanos and hiking, fishing, and surfing are popular activities for those traveling to Nicaragua, as well as visiting the Bosawás Biosphere Reserve, the second-largest rainforest in the region.

Costa Rica on the Southern border is the complete opposite of Nicaragua and one of the most famous diving destinations in the world.

Along its Pacific coastline, pelagic life is abundant and humpback whales, manta rays, sharks, and large schools of fish roam the waters. All levels of divers will feel right at home here

The country boasts rich biodiversity and you should definitely check out one of the numerous national parks. It also enjoys good freedom of press and is frequently found in the top 15 of the happiest places on Earth.

However, the crown jewel of Costa Rican scuba diving is not located on the mainland.

Far offshore, about 550 km (342 mi) to the southwest lie the famous Cocos Islands, the unofficial hammerhead shark capital of the world.

Hundreds of them roam the islands in large groups and there is a near 100% sighting chance. Other large marine species such as rays, dolphins, and even whale sharks can be encountered, as well.

Some of the best dive sites on Cocos Island include Bajo Alcyone to see hundreds of hammerhead sharks, the coral gardens of Manuelina Garden, and the underwater arch of Dos Amigos Grande.

The only way to visit Cocos Islands is by liveaboard from San Jose, Costa Rica and the journey takes roughly 40 hours. However, it is completely worth it!

Oh, and if all this hasn’t convinced you, they even have Orcas visiting here!

Last but not least, Panama is the southernmost country of Central America but one of the most popular among travelers.

The world-famous Panama canal connects the Atlantic and Pacific and thousands of ships cross here every day. The culture is rich, and travelers will note that the country is slightly more expensive as those bordering it.

For scuba divers, Panama offers some of the best diving in Central America with anything from shallow reef diving, to large pelagics, and wrecks. Most of the dive sites are in protected marine parks, making the diving conditions here pristine.

Last but not least, Gatun Lake allows you to dive around forgotten construction equipment and many dive centers offer tours here.

Here are the best diving destinations in Central America you absolutely should check out for your next vacation:

The Great Blue Hole in Belize is one of the most famous travel destinations in the world and surely one of the best dive sites in Central America.

Interestingly, the remaining shore diving in Belize is arguably even better, however, every diver wants to see this famed place.

A large drop off into the unknown awaits here, after which you can explore the depths at up to 40m (120ft) and see famous landmarks like the Half Moon Caye National Monument, Aquarium, and stalactites!

It’s a great experience albeit not cheap.

A dive will run you about $150, but at least there are some package deals available.

Make sure to also visit other dive sites in Belize while you’re there!

Cocos Island is arguable the most famous dive spot in Central America and on pretty much every top 10 of the best dive sites in the world.

They are native to these islands year-round and there is a near-100% sighting chance for them.

Between June and October, whales sharks come to the numerous cleaning stations, and even orcas can be spotted occasionally.

Diving in Cocos Islands is only for advanced divers and heavy currents and surges await. Most dives here are blue water drop downs so you should have some experience with this before diving here.

Liveaboard diving is the only way to get to Cocos Islands, so check out them out below!

Diving in Central America is most famous for its ocean and reef dives, however, Lake Atitlán in Guatemala is a nice alternative.

It is a mountain lake located at 1,500m (4,800ft) elevation and thus requires altitude diving procedures. There are no dive shops close by so you will have to find one in Santa Cruz or some other place.

The volcanic vents underwater are steaming hot and boiling an egg is a fun activity local dive guides like to show their guests.

A dive will only cost you about $50 which is super cheap!

Scuba diving in Honduras is among the cheapest you can find anywhere which is astounding when considering the quality of diving here.

Sharks, and coral reefs in pristine conditions await and diving is easy everywhere.

The best places to dive are the two islands of Roatan and Utila which belong to a protected marine park.

Take a liveaboard cruise here to see all of it at affordable prices!

Depending on what you want to see, you should plan your trip accordingly:

July-October is best for humpback whales, but August and September have the highest sighting chance. January – March is whale shark season, and from March – April manta rays appear.

The dive sites are remote and liveaboard diving is recommended. In return, the reefs are healthy and if you are an underwater photographer, you will have a great time!

Diving is mostly easy and suitable for any level.

20 dive sites await scuba divers, and snorkelers around Little Corn Island, as part of the larger Corn Islands in Nicaragua.

It is a great dive spot and a hidden gem still.

Sharks, rays, dolphins, turtles, and plenty of fish can be found in these reefs and the water is nice and warm.

Blowing Rock is the most famous dive site here and invites divers to the volcanic boulders and the surrounding marine life.

Nurse sharks and large southern sting rays are a favorite among local divers and even eagle rays can be spotted here.

You can get 3-tank dives for less than $100 here, making this a super budget dive spot!

El Salvador is one of the few places where you can go scuba diving in a crater lake, namely Lake Coatepeque.

It is much less frequented than the more popular Ilopango Lake, but equally as pretty.

You can dive over volcanic rock formations and spot zebrafish and other inhabitants of the lake.

There is even a hidden statue underwater!

Diving here is super affordable, like the rest of El Salvador, and great to spend a day or two while traveling through the country.

What to see when diving in Central America

Where to dive in Central America

All countries in Central America

There are 7 countries & territories in Central America and we have published the following guides.

Diving by Region
Diving around the world See all diving destinations